AND CICERO'S RETTORICA, PART I


Coluccio Salutati annotated Villani's biography of Brunetto Latini by writing "rethorico" in the margin of that text./Laurentian Ashburnham 492; problem in Francesco Novati's study, La giovinezza di Coluccio Salutati, where he stated Coluccio Salutati never mentioned Brunetto Latini (Torino: Loescher, 1888)./ Thus there was to be a continuation into the future from the past, of Brunetto's love for Cicero, his lovely image of "per una mia sichura colonna; sicchome una fontana che none istagna." Ronald G. Witt noted in Hercules at the Crossroads: The Life, Works and Thought of Coluccio Salutati, that the "stilus rhetoricus" had fallen out of favor since the days that Brunetto had so fully used it, until Salutati's revival of it in 1375./(Durham: Duke University Press, 1983), p. 125./Helene Wieruszowski noted that this was also called the "stilus Isidorianus," after the great Spanish bishop who was so seeped in the Classics./"'Ars dictaminis' in the Time of Dante," in Politics and Culture, p. 374./

There were at least two styles which Brunetto used, the one being mockingly flaunted in Chancery 'paper wars' by Pier delle Vigne, the Ghibelline Chancellor to Frederic II, and whose origins went back to Frederic's antagonist, the Roman Curia, which had developed a highly ornate and biblically-larded rhetoric for its purposes--to preach emotional crusades. Pier delle Vigne's borrowing of that style had the quality of invective. When Latini made use of that style, it was in turn to mock Ghibelline pretensions--though it had once had Guelf origins. Then even Dante borrowed it when he wrote of Latini in Inferno XV, giving in that text the most outrageous puns, and in his own exilic letters of state--which were such tragic exercises in futility, lacking a comune for their context.

The second style was that of Cicero and serious. That style was far more appropriate for the Florentine comune, which modeled itself upon the Roman Republic, than was the other style, customarily and invectively used by Popes and Emperors against each other. For Brunetto's revival of the Ciceronian style, it was necessary for him to conquer it into the vernacular, to make it available to the people, such as bankers and merchants who so intensely participated in Florentine government--even when in exile. Hence these translations of the Orazioni and of the Rettorica into Italian./ Once a professor I knew, William J. Brandt, began a book, The Shape of Medieval History, with a tale of a lost reference, a lost note card. I, too, have to confess to one. I remember reading that Brunetto changed the spelling to "rettorica" to indicate his combination of the art of speaking and the science of governing--but I do not remember the source of that comment./

Francesco Maggini believed that Brunetto Latini first translated the De inventione of Cicero, then put that theory into practice by translating the orations: "Dopo aver volgarizzate le teorie della retorica classica dal De inventione ciceroniano . . . é naturale che Brunetto Latini volesse darne gli esempi concreti togliendoli appunto da quell'autore da cui aveva tolta le regole."/I Primi volgarizzamenti dai classici latini (Firenze: Le Monnier, 1952), p. 16./ Though it is more likely, given our greater knowledge of Brunetto's political career and of his intense political activity preceding the exile of 1260-1266 when he translated Cicero's De inventione, that the orations were relatively earlier, this by means invalidates the relationship between them. It only reverses the ordering of this part of the canon. It was Brunetto's nature to use praxis first, then to draw theories from that praxis. It certainly still places Brunetto Latini's translation of the De inventione earlier than that of Jean d'Antioch, carried out in l282.

Like many another medieval work, among them the great cathedrals, Thomas Aquinas' Summa Theologiae, Chaucer's House of Fame and Brunetto's own Tesoretto, it was to be left unfinished, a more condensed - and finished - version being given instead in the French Tresor, Book III, where it was specifically addressed to Charles of Anjou. Then one looks back upon those ancient and fragmentary monuments and recognises that they all share in common the sense of innovation, of experimentation; some of which failed, like the nave at Beauvais, because they had dared too much. The commentary to Cicero which Latini gave was out of all proportion and would have taken a lifetime for him to complete. Some of it is based on the commentary by Grillo, some on the commentary by Victorinus, some on the commentary by Theodoric of Chartres, Chancellor of Chartres Cathedral./Fabii Laurentii Victorini, Explanationes in Rhetoricam M. Tullii Ciceronis libri duo, ed. C. Halm, Grillii commento in primum Ciceronis lbrum de inventione, Rhetores Latini Minori, Leipzig, 1863, I,155; II, pp. 596-7; Guido Baldassarri, "'Prologo' e 'Accessus ad auctores' nella Rettorica di Brunetto Latini," Giornale storico di letteratura italiana, 12 (1976), 102-116; Baldasarri, "Ancora sulle 'fonti' della Rettorica: Brunetto Latini e Teodorico di Chartres, Studi e problemi di critica testuale, 19 (1979), 41-69; Gian Carlo Alessio, "Brunetto Latini e Cicerone (e i dettatori)," Italia medioevale e umanistica, 22 (1979), 124-169./ - but the most interesting commentary of all is that by the translator Brunetto Latini who updated Cicero, speaking of legal cases involving Florentine merchants and Genovese sailors and much else for his examples. These are the places where his text comes alive - almost as if we were to glimpse into some merchant's household in Arras - as indeed one can in a Van Eyck Annunciation or in the Marriage of Jan Arnolfini see through windows and doorways into Flemish households.

Brunetto first wrote La Rettorica in Italian, leaving it, like the Tesoretto, that other exilic Italian work, unfinished. Probably these tasks were interrupted by the need on the part of the exiled Florentine bankers for a book, which was to be the Tresor, to be written in French so that it could be understand by Charles d'Anjou. Brunetto had acquired various texts in Spain. He demonstrates familiarity in the third part of the Tresor with not only Cicero's De inventione but also with Aristotle's Rhetoric, a work which, like Aristotle's Nicomachean Ethics, had been translated by Herman the German./ See Jaime Ferreiro Alemparte; Robert A. MacDonald communicated to me the following: "From various sources it appears that Herman was in Toledo from 1240-1256 as a translator into Latin of (1) Aristotle's Poetics with the commentary by Averrois (finished March 1256) and (2) Alfarabi's work on Aristotle's Rhetoric. Alleging his illegitimacy, he asked that if he were to be made a bishop that it not be in a wealthy diocese so that he could concentrate on his scholarly work. From December 1266 until October or November 1272, when presumably he died, he was Bishop of Astorge."/

Both Ronald G. Witt and Cesare Segre have discussed its importance, the first in terms of rhetoric in general, the second as specifically for the public uses of the comune,/ "Brunetto Latini and the Italian Tradition of Ars dictaminis," Stanford Italian Review 1983), pp. 5-24; La Prosa de Duecento, ed. Cesare Segre e Mario Marti (Milano: Ricciardi, 1959), p. 132./ while Helene Wieruszowski and Aristide Marigo have discussed qualities in Brunetto's rhetoric within the chancery context in which he worked./Ars dictamininis in the Time of Dante," in Politics and Culture, pp. 359-377; "Il 'Cursus' nella prosa latina dalle origini cristiane ai tempi di Dante," Accademia patavina di scienze, lettere ed arti: Atti e memorie, 47 (193l), 321-356. This last analyzes one of Brunetto's Latin documents of state, the peace treaty with Siena of 1254, in terms of rhetorical cursus, p. 342. / Francesco Novati, especially in Le Epistole, had brilliantly discussed the transmission of Cicero not only to Dante but to all of Florence by means of Latini's teachings, a rich vein also to be mined by Domenico De Robertis concerning Dante's work, in Il Libro della Vita nuova. /Lectura Dantis: Le Epistole: Conferenza letta da Francesco Novati nella Sala di Dante in Orsanmichele (Firenze: Sansoni, 1905); Il Libro della Vita nuova (Firenze: Sansoni, 1970)./ Ronald Witt's essay on Brunetto Latini's ars dictaminis is potentially an excellent basis for an analysis of the Vita nuova in terms of Latini's material from Cicero concerning tenzone between lovers with their letters and their poems: "These letters belong to rhetoric as do songs in which one lover speaks to another as if there were a debate ahead." Giuseppe Mazzotta in Dante, Poet of the Desert, likewise sensed the importance of Ciceronian rhetoric as taught to Dante by Brunetto, in this instance for an analysis of Ulysses' rhetoric./ (Princeton: Princeton University Press, 1974), pp. 73-141./ While Francesco Maggini stated, accurately, that as Cicero was for Brunetto so was Virgil to Dante./La "Rettorica" italian di Brunetto Latini (Firenze: Galetti, 1912), p. 70./ The one chose the rhetoric of freedom, the other that of peace; the one of the Republic, the other of Empire. Quentin Skinner, Foundations of Modern Political Thought (Cambridge: Cambridge University Press, 1978), observed these as polarities at work - and their political reconciliation - in medieval Florence.

In manuscript Magliabechiana II.IV.127, in the Florentine Biblioteca Nazionale, parts are rubricated, in red ink. The passages translated from Cicero's De inventione are in larger letters. Capitals alternate in red and blue; likewise do the paragraph signs. In the original paragraphs are run together, but indicated by paragraph signs ¶ In the original capitalization is sometimes not given to proper names but is supplied here. All capitalization in text is supplied. The manuscript gives both "e" and "et." It also uses the Latin tyrronian note "7" which is given here as "et." (Tyrro was Cicero's secretary and this system of abbreviations, used in the Middle Ages to conserve parchment, was derived from Roman shorthand.) The manuscript gives no diacritics (other than c cedilla), or quotation marks. Frequently letters and words are spaced differently than in current usage. This text is modernized to aid the reader but also attempts to replicate the layout of the original. The manuscript begins with a historiated initial in the top half of which is shown Cicero an medieval garb, wearing a black cap and red robe, Brunetto below him in the bottom half of the S in a pink hat and robe. It came from the same workshop as produced the Madrid, Biblioteca Nacional Ethica, which likewise gives portraits of its primary author, Aristotle, and the translator, Taddeo d'Alderotto or Brunetto Latini. This manuscript is late, (early fourteenth century Tuscan), but excellent. It was with reluctance the previous editors passed it over for their base text. For further variants than these between the manuscripts and the printed edition, consult Francesco Maggini's critical edition, La rettorica, with preface, Cesare Segre (l968). Likely Latini titled the work "Rethorica" or "Recthorica." 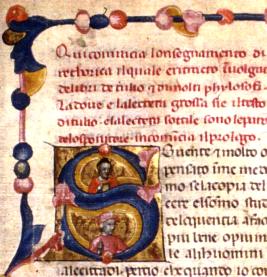