For whereabouts of these places consult Florencemap.html which has the corresponding numbers by them.

Archivio di Stato di Firenze (near 36):
Now situated in Piazza Beccaria , this archive contains historical documents concerning Florence. I have found in it countless documents concerning Dante's teacher, Brunetto Latino, Florence's thirteenth-century Chancellor, documents about Birgitta of Sweden, documents written in the hands of King Charles I of England and of his wife, Queen Henrietta Maria, who was a Medici, and documents about the Risorgimento. Italian will be a help in using the Archives. For medieval and Renaissance materials, also Latin.

Biblioteca della Spiritualità "Arrigo Levasti" (24)
Behind and part of the San Marco monastic complex, this library specializes in Dominican spirituality, an excellent resource for studies on Saint Catherine of Siena. Now closed down.

Mediatheca Fioretta Mazzei:
Membership is by giving it a book. Situated within the so-called English Cemetery of the Piazzale Donatello , the library and workshop concentrates on international and ecumenical studies in theology, monasticism, including women contemplatives, the Victorian Anglo-Florentines, and is especially rich on Birgitta of Sweden, Julian of Norwich, Elizabeth Barrett Browning. It also contains materials for the study of manuscripts on codicology and paleography. Its workshop can teach paper marbling, portfolio making, picture framing, etc.

Biblioteca Nazionale Centrale di Firenze (27):
Italy's National Library of which many books were damaged in the 1966 Flood. One of the three Florentine libraries with magnificent manuscript holdings. One needs an Italian Identity Card or foreign Passport which one exchanges for books, this being the usual procedure in Italian libraries. For manuscript study one needs a letter of introduction from one's university chancellor, etc. In all libraries one leaves books and other possessions in lockers, taking with one just writing implements, paper, and one's identity documents. Overlooking the Arno by Santa Croce, Piazza Cavalleggeri . Website: www.bncf.firenze.sbn.it

Biblioteca Marucelliana (near 24):
In via Cavour, by San Marco Square, a fine research library, much used by University of Florence students.

Kunsthistoriche Institut (near 25):
An excellent German art historical research centre in via Giuseppe Giusti, near the Piazza Santissima Annunziata .

Laurentian Library/ Biblioteca Medicea-Laurenziana (20) :
This library, in the upper cloister of San Lorenzo 's monastery, built by Michelangelo for the Medici, was safe from the 1966 Flood and contains a priceless collection of classical, medieval and Renaissance manuscripts. Again, for manuscript study, one comes with a letter from one's university chancellor and likewise previous experience and training in the reading and study of manuscripts. Language study is essential. Many of these manuscripts are bound in the design created for them by Michelangelo of red leather with brass bosses, labels nailed onto them under sheets of horn (the Renaissance plastic), and still have the chains with which they were once fastened to their reading desks. One has to be careful not to rattle the chains and the other readers! This is the only Library where it is also possible to visit as a tourist and see the stairs and room designed by Michelangelo for the Medici Princes.

San Marco, Michelozzi Library (24) :
In the Museum of San Marco and its Fra Angelicos, it includes manuscripts illuminated by Fra Angelico.

Accademia di Belle Arti (23):
Michelangelo's David is here and several other of his pieces, as well as a fine collection of paintings. Near the Piazza di San Marco. Long lines of tourists waiting to enter.

Antico Setificio Fiorentino (in via Bartolini before the Porta San Frediano, Oltrarno)
Not a museum, but a commercial establishment so enter if you wish to buy their book, or silks . They use the ancient methods for dying and weaving and many of their colours are those used in the Fra Angelicos in San Marco.

Bardini (cross the Ponte alle Grazie to Piazza di' Mozzi in Oltrarno):
Has a fine Tino da Camaino marble sculpture of Caritas, a wooden sculpture of St Catherine of Siena.

Bigallo (near 2, in Piazza del Duomo):
Only open Monday mornings, but a superb, small collection, including Della Robbias, one of the Nativity in chiaroscuro, and the Madonna della Misericordia with the map of medieval Florence. By the Duomo and Baptistry, again this exemplified Florence's practice of mercy, receiving unwanted babies and arranging for their care.

Buonuomini di San Martino (near 4 and 6):
Every week the twelve members of the Buonuomini di San Martini meet and allot the offerings given to their chapel to the proud poor. There are two slots, one on the left side of the door for suggestions as to whom alms need to be given, on the right for receiving money for those alms. Inside are frescoes of the Seven Acts of Mercy, Giving Drink to the Thirsty, Feeding the Hungry, Clothing the Naked, Shletering the Pilgrims, Nursing the Sick, Visiting the Prisoners, Burying the Dead.

Casa di Dante (4):
Near the Bargello and Palazzo Vecchio, a Victorian reconstruction of Dante's house with a didactic musem and a good shop for purchasing editions of Dante's Commedia.

* Cenacolo di Sant'Apollonia (22):
Off from San Marco Piazza, two blocks down towards Piazza della Independenza in a pink building, an inconspicuous door, on your left. This is the refectory of a women's convent where these Andrea del Castagno frescoes for hundreds of years were hidden from public gaze. This museum is free and, like San Marco, can be visited in prayer and contemplation. The Andrea del Castagno St Girolamo (Jerome) ought to read that the two women beside him are Paula and Eustochium.

Duomo (1):
Florence's Cathedral, begun by Arnolfo di Cambio, finished by Brunelleschi, Michelangelo copying it for St Peter's, Rome. It once had Michelangelo's Pietà, it still has the Michelini of Dante teaching Florence the Commedia. Beside it where there are ambulances is the Misericordia, whose workers had laid the first stone of the Duomo, seven centuries ago. Quietly enter the Misericordia 's church with its lovely Della Robbia, and the medical dispensary next door, and you will see the black-garbed workers, rosaries at their waist, the garb also of Michelangelo's Nicodemus in his Pietà, which is also his self-portrait. The best liturgy of all the year is the Cena Domini, Maundy Thursday night, when a great banner surmounted by olive branches is carried with candles, like Dante's Purgatorio procession of candles seeming like trees.

Fiesole:
Take the number 7 bus from the station or San Marco to Fiesole to see its Romanesque Cathedral, its Roman/Etruscan Museum, complete with Roman theatre, and the Franciscan monastery on its hilltop. In the legends Dardanus from Fiesole founded Troy, whose descendant Aeneas founded Rome. Then the Romans came, conquered and razed Fiesole, founding from its Etruscan women married to Roman soldiers the new city of Florence in the river plain.The Baptistry was said to be their Temple dedicated to the war god Mars, then rededicated with Christianity to St John the Baptist.

Museo Archeologico: (23) Via della Colonna from the Piazza della Santissima. Definitely worth visiting for its loot, brought back by Champollion and Rosellini in 1828 from Egypt and Nubia, and for its splendid Etruscan treasures, such as the Chimaera.

* Museo Horne (before you get to 26) : One of Florence's finest museums, with works by Simone Martini, Della Robbia, Donatello, well worth visiting, largely unknown to tourists. On Via dei Benci toward Santa Croce, behind the Palazzo Vecchio . 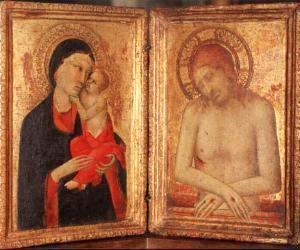 * Museo Galileo (32): By the Arno, behind the Palazzo Vecchio, where one can look through Galileo's telescope and see a thousand other treasures. Fine website. Have you read Dava Sobel's Galileo's Daughter?

Opera del Duomo (behind 1): A secularized museum of the treasures once created for the Duomo, such as Michelangelo's Pietà, the Donatello and Della Robbia cantestoria, which deserve to be restored in situ. Behind the Duomo, which was begun by Arnolfo di Cambio in the thirteenth century, finished by Brunelleschi in the fifteenth century, and which was intended to be the city's spiritual centre, to balance that of the Palazzo del Popolo.

* Orsanmichele (12)
A granary built by the comune, originally in the thirteenth century, rebuilt after a fire in the fourteenth century, to feed the hungry, even the enemy, in time of famine. Influenced by the Spanish king Alfonso el Sabio's gift to Florence of his Las Cantigas de Santa Maria (Biblioteca Nazionale), with Orcagna's Tabernacle, a painting of the Virgin and Child, before whom candles were traditionally lit. Countless miracles were told of it, and were celebrated even by Dante's fellow student, Guido Cavalcanti in verse. On Mondays, one can enter the building across the street, the Arte della Lana of the Società Dantesca Italiana, climb the stairs to the bridge, and cross over into the two upper floors of Orsanmichele.The medieval building, like the Duomo and the Palazzo Vecchio, is enormous and the views are spectacular.

* Ospedale degli Innocenti (beside 25): In the Piazza Santissima Annunziata, where Florentines left unwanted babies to be raised by the Comune. Ghirlandaio's Epiphany is here, painted for them, as well as the lyrical loggia with its spandrels ornamented by the Della Robbia foundling in their swaddling clothes. In another church in this Piazza a hundred of Florentine's poor are fed each day. The Via dei Servi, of the Order founded by seven Florentine noblemen, leads between the Church of the Santissima Annunziata and the Duomo. Enter the church with care as its altar is by the door, at the wrong end, enshrining a painting of the Annunciation, begun by a Servite friar and finished by an angel. Elizabeth Barrett Browning writes about it in Aurora Leigh .

* Palazzo Davanzati (near 13) : One of Florence's finest museums, a medieval palace complete with its medieval plumbing, frescoed walls, furniture of the period, especially a delight for children. Behind and beside the Post Office .

Palazzo Vecchio (8): In Piazza Signoria, it is the secular, the civic, the comunal, centre of Florence. Built by Arnolfo di Cambio in the thirteenth century, as the People's Palace of the Florentine Republic, long before the Medici were heard of, has a fine art gallery. The Via dei Calzaiuoli leads between it and the Duomo.

* San Marco (24): The museum is secularized but the tourists visit it in the silence of prayer. Fra Angelico's paintings are a miracle. This was also Savonarola's monastery, about whom George Eliot wrote in Romola and Elizabeth Barrett Browning in Casa Guidi Windows. Savonarola made the Medici give Florence back to her people, as a Republic whose King was Christ.

Stibbert: 26 via Stibbert, 7, via Montughi. So far away it is off the map. Closed on Thursdays.

Uffizi : Long lines of tourists waiting to enter. The early medieval paintings with their gold leaf and serenity of saints and martyrs are of the Golden Age of faith and innocence. Then, with the Medici's Renaissance, the paintings change to egotistical portraiture against brown bitumen backgrounds and posturing pornography. I hurry through the later rooms! We've regressed, not progressed.