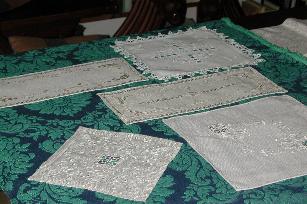 The 'Embroidery School'  was begun in 1979 by Maria Margheri Manetti, using her experience as catechist, with the idea of giving the children of Borgo San Lorenzo in the Mugello something they could do during the idle summer hours. This continued for twelve years in Borgo San Lorenzo amongst the five to fourteen year olds. Then the participation by children diminished in numbers due to their afternoon tasks and in their place came young and older women even from beyond the Mugello.

With the participation of such older students the School has grown much larger with the collaboration of teachers capable to instructing in a vast array of stitches in a way that is almost perfection. Especially now we have as teacher in Punto Antico, or drawn-thread work, Signora Maria Luisa Baldini who teaches the students with great enthusiasm all the secrets of this art. With other kinds of stitching the School has recourse to Signore Monica Tigges Natalini and Vittoria Oberto Zampieri.

The school opens in October and ends in June and is held in the sunny spacious hall of the Youth Centre in Mugello in the Parish of Borgo San Lorenzo. Weekly on Tuesdays and Thursdays it meets from 4:00 to 6:00 p.m. The school possesses a great number of old and new designs, a vast collection of books and old journals and a fine collection of embroidery instruments and tools. During summertime the School is held in turn in the gardens of its students. In the near future we plan a summer course in 'Agoturismo'. [In Italian the word for needle is 'ago'. Tuscan Italians make their elegant farmhouses accessible to tourists in what they call 'Agroturism', agricultural tourism. Hence Maria Margheri Manetti's play upon words of 'agoturismo', an embroidery holiday!]

rawn-thread work has its origins in the distant past: it is carried out by counting threads and fashioning an infinity of stitches drawn from these basic ones: Square Stitch, right angled or oblique (which surrounds the meshwork and subdivides the work into small spaces thus making the thread counting easier); and the Lily or Faggot Stitch (which completes and finishes the other stitches), and the more particular stitches of which there are numerous varieties; Curl Stitch, Spirit Stitch, Royal Stitch, Air or Mesh Stitch, Aemilian Stitch, Flat or Satin Stitch, Written Stitch, and Web Stitch. The use of these stitches, brought together and composed according to the embroiderer's fancy, creates a work that is splendid and very personal.

Examples of drawn-thread work are found on various objects from the past which are documented from 1400 on using this type of art. The fifteenth-century embroiderers requested and obtained from the painters of their day the advertizing of their work of counting threads in which we can admire the beauty of such work in the books on sewing: Alex Paganino's 'Lace Cloth', Cesare Vecellio's 'Historic Lace' and Guadagnino's 'Samplar'. These famous writers gave such importance to embroidery as to become precise and meticulous guides not only to the stitches of drawn-thread work but even to the weaving of the cloth they worked . . .

Passerotti's book which documents the history of the Aemilian Art, shows how Bolognan nobility came to acquire these forms of embroidery together with drawn-thread work for bed covers, curtains, tablecloths, etc. Binetti Ventura in her 1910 book, Laces and Sicilian Women, recounts how drawn thread work had geometrical forms acquired from Arab culture and that Sicily had been the cradle of excellence for this thread-counting craft. In her work Ancient and Modern Italian Embroidery Emilia Ricci speaks of drawn-thread work 'booklets in which the motifs were constantly changing, had an enormous diffusion, an ardent following and continued detailing of designs, being engraved and printed to publish and republish them, changing the woodcuts even of one country for another.'

The oldest of these booklets are German, one published at Zwichau in 1525 and the other at Cologne in 1527. It is not known whether there were earlier publications in Italy. A 1547 catalogue proves that in 1500 it was customary for women to copy onto a piece of beautiful cloth, as in a notebook, the stitches, the drawn thread work, and the designs that pleased them most. Such a sampler, jealously guarded, came to be handed down generation upon generation and consulted each time there was need to carry out a piece of drawn-thread work. Even though centuries passed the technology dominated all aspects of the production; in embroidery work time itself seems to stand still.

At the 'Embroidery School' in Borgo San Lorenzo drawn-thread work is taught by Maria Luisa Baldini, who grew up in this art at Barberino di Mugello, which had an ancient tradition of embroidering with drawn thread work. Signora Baldini says, in fact, that she learned drawn-thread work from her mother and from her aunt who together had a school with many pupils, where they used to carry out the most beautiful work for the use of customers who were not only Florentine or Tuscan, being esteemed throughout Italy.

Their designs were on parchment or sometimes on plain, poor paper, but their skill could create splendid objects. Maria Luisa since she was small had lived in this atmosphere and her aunt gave her a passion for perfection which caused her to create and to have be created true works of art in embroidery. In listening to her story we remember the world described by Palazzeschi in Mattress Sisters. Now as then the women who attend the Embroidery School carry out splendid work under the careful and practical teaching of Maria Luisa, using the same preparatory procedures, recopying on the cloth the increasingly complex stitches made with curls, with written web stitches, etc., with the sole exception that now instead of parchment we have photocopiers and computers.

Square Stitch
This is the basic Stitch for drawn-thread work embroidery. It is worked from right to left, according to the design always counting four threads. It is illustrated in Figure 1 below. This stitch is used for edges and hems of all types of drawn thread work. To do the Square Stitch, use number 8 or number twelve thread, according to that of the cloth, which it needs to match.

Lily Stitch
First a row of Square Stitches is done with four threads to four, then six threads are removed and one carries out a second row with faggots of six threads, as shown in the Figure 2, then this is competed with a second row of Square Stitches as in Figure 3. The Lily Stitch is par excellence the most useful stitch for drawn thread work and is best even for hemming. To do the Lily Stitch, use number 8 or 12 thread according to the cloth, which it needs to match.

Princess Stitch
This is carried out counting four threads as in the figure, with one in front, another back. To do the Princess Stitch, use number 8 or 12 thread according to the cloth which it needs to match. 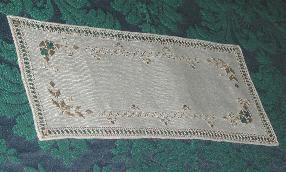 Flat or Royal or Satin Stitch
This is carried out always counting four threads according to the figure. See above image. To do the Flat Stitch, use number 8 or 12 thread according to the cloth which it needs to match. 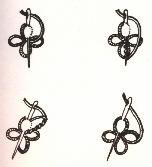 Openwork Stitch
The cloth is punched with a small hole, which is then bound with Cord Stitch, or, more elaborately, with a reverse Button Hole Stitch. To do the Openwork Stitch, use number 8 or number twelve thread, according to that of the cloth, which it needs to match. Examples can be seen in III below with the smaller and round openings in the central design.

Curl Stitch
This is done with the thread alternating four threads taken up and four left. Then sewn a second time in the opposite way. This is finished off with a Satin Stitch, taking care not to take up the fabric. This type of work remains in relief on the fabric, using regular cloth and number 8 or 12 thread matching that of the cloth. 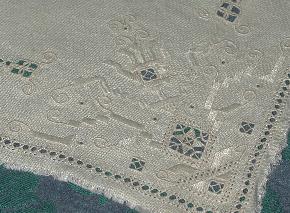 The curls at the end of the satin stitches are in Curl Stitch, the cut centre in Aemilian Art, the small cut circles in Openwork Stitch, the border in Square and Lily (Faggot) Stitches.

Spirit Stitch
First the outline is edged in squares, then squared again within, creating a network of drawn thread and cloth. The edges are then bound with Cord Stitch. A network is created within the drawn-thread, cut spaces. The samplar here is antique. 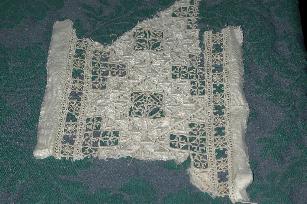 Aemilian Art Stitch
This is done like Cut Net Stitch. One makes a central cross and covers it with Cord Stitch, continuing until the area is divided into four triangles. One can then weave upon these, making drawn-thread work lace. An example of Aemilian Art can be seen in the largest cut square in III.

Now click on the 'enlarge' beside the first image in this file, and here, and see if you can identify all the stitches you have seen in the pieces of drawn-thread work displayed there. Enlarge

It is satisfying to prepare this essay on 'Punto Antico', Drawn Thread Work, first as a printed book in Italian with Libreria Editrice Fiorentina, now as an essay in English on the World Wide Web. There are two reasons why I have been inspired to do so: the first because there were no publications that studied this subject exclusively; the second, that this kind of embroidery has always been a specialty of Florence and our Mugello.

The skill of the embroiderer should result in even more than this book and essay can show. The illustrated examples, all done on drawn thread linen of equal warp and woof, are only a part of the precious work carried out on table cloths, bed linens, and curtains which the ladies of the Embroidery School have created. Other examples were part of the 1850 samplar book which the Tofanari family of Scarperia gave us, for teaching use in the school.

As director of the Embroidery School of Borgo San Lorenzo, I am delighted that this collection can give the opportunity to so many women to carry out in turn this splendid work passing contented hours together with our 'Punto Antico'.

Julia adds that the easiest drawn-thread work - and the most useful and sacred - is to make corporals for altars for the Host. She makes the hem with drawn-thread work, a lilied cross in stemstitch at the centre. She will present a sample and directions later and can supply linen and thread from Florence for making these. juliana@tin.it

To buy the small, beautiful book in Italian with its fine woodblocks and examples: